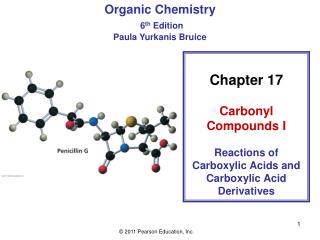 4. Organic Compounds: Cycloalkanes and their Stereochemistry - . why this chapter?. because cyclic molecules are commonly

Chapter 22: Carbonyl Alpha-Substitution Reactions - . why this chapter? many schemes make use of carbonyl a -substitution

The Esters - . fischer esterification. this is not necessarily the best method of preparing esters, but it does serve to