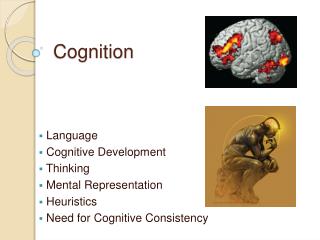 Memory and Cognition - . retrieving memories and the failure of memory. memory videos. cards:

Cognition Thinking and Reasoning - . key question. how do we construct and process information based on our needs,

Cognition - . ‘cognition = to know ( the science of knowing ) in human being ( animals??) (living creatures) many

Introduction to Cognition - . cognition. the mental activities associated with thinking, knowing, and remembering

Studying Cognition in Animals - . cognition. cognition : study of the internal states and processes that produce Chapter 6: Development of the Self and Social Cognition - 1. developing a self-concept. self-conceptan individual's