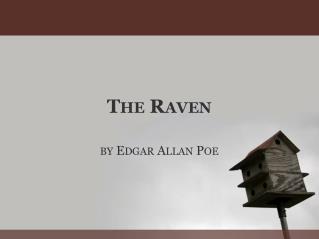 T HE R AVEN. BY E DGAR A LLAN P OE. T HE R AVEN - S ETTING. The chamber of a house at midnight. Poe uses the word chamber rather than bedroom apparently because chamber has a dark and mysterious connotation. T HE R AVEN - N ARRATION.

The Raven - . vocabulary you need to know. things to remember. edgar allen poe likes to use multiple definitions of a

THE RAVEN - . e. a. poe. once upon a midnight dreary, while i pondered weak and weary, over many a quaint and curious

The Raven - . “ nevermore ”. ---presented by 贾璐. in this poem the raven steadily repeats the word

Illustrations of “The Raven” - . by gustave

“The Raven” - . death. “bird of yore” symbol of bad things of the past . pallas of athena. wisdom, knowledge.

THE RAVEN - . using a venn diagram, compare and contrast “the raven” with the simpson’s parody. rhyme. end rhyme -

The Raven - . the raven. by edgar allan poe. main

The Raven - By edgar allen poe. the raven. vocabulary. plutonian =relating to the underworld. pallas = athena, goddess of

Today- we read Poe’s “The Raven” Please begin journaling for a few minutes. We will take some notes after about