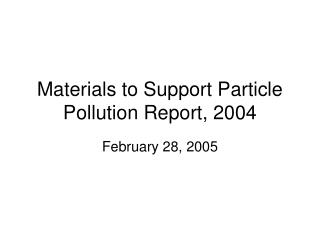 The impact of mining activities and heavy metal pollution in the Apuseni Mountains, Romania - Balwois conference – 25,

Study on Health Effects of Indoor Air Pollution in China - . presented by pan xiao-chuan et al. dept. of occupational and

Air Pollution Background - . a widely recognized problem in developed and developing nations definition: the presence of