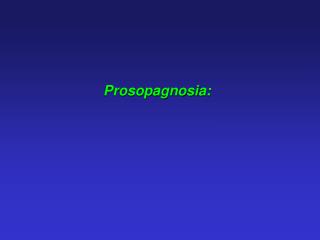 Functional localization of the cerebral cortex - . development. three general areas have been proposed to define the

Sensation vs. Perception - . sensation: a process by which our sensory receptors and nervous system receive and represent

Mechanisms of Evolution - . how does evolution work?. individual organisms cannot evolve. populations of a particular

Face Perception II. Visual Imagery - . is face recognition special?. arguments have been made for both functional and

Personal knowledge… - . over to you!. two real world examples, where natural science and psychology overlap….

Prosopagnosia - . agnosia : a failure of recognition that is not attributable to a sensory deficit or to verbal or

Objects and Faces: The Neuropsychology of Agnosia and Prosopagnosia - . http://www.neuro.spc.org/bbk. vaughan bell