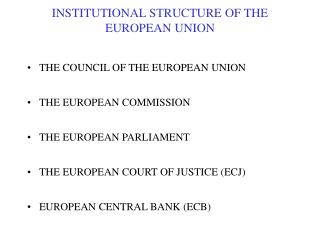 INSTITUTIONAL STRUCTURE OF THE EUROPEAN UNION INSTITUTIONAL STRUCTURE OF THE EUROPEAN UNION

ATTITUDES TOWARDS INTEGRATION WITH THE EUROPEAN UNION - . presentation of qualitative and quantitative research march,

The Institutional Proposal and Beyond - . western association of schools and colleges accrediting commission for senior