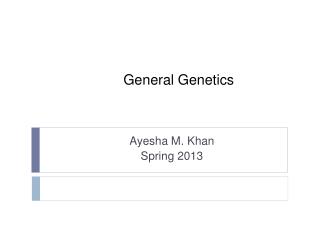 GENERAL GENETICS - . ayesha m. khan spring 2013. linkage. genes on the same chromosome are like passengers on a charter

Cytogenetics General Genetics - . dr. attya bhatti. cytogenetics. is the study of the structure and properties of

BIMS 808 General and Molecular Genetics - Dna is, in fact, so precious and so fragile that we now know that the cell has