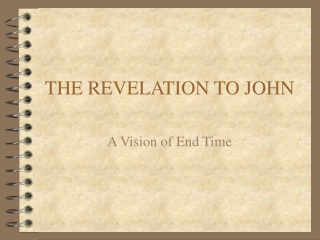 THE REVELATION TO JOHN. A Vision of End Time. Textbook Reading : Chapter 15: - “A Vision of End Time”, pp. 516-524. Introduction : - Revelation is an apokalypsis or unveiling of unseen realities; “disclosure”/”unveiling”/”revelation”; The Hero’s Journey - . the separation initiation and transformation the return. separation. the call invites us into

JESUS CHRIST: GOD ’ S REVELATION TO THE WORLD - . chapter 9 jesus in the gospel of john. organization of john ’ s

Book of Revelation - . apocalyptic. book of revelation what do we have?. revelation or revelations ? visions and/or

The First Epistle o f St. John - . the 1 st epistle of st. john. author: + the apostle john is the author, who also wrote

The Gospel According to John - . an overview of john’s gospel. a different perspective on jesus and his life than the

Revelation chapter fourteen - “the revelation of jesus christ, which god gave him to show his servants - things which

The Seven Seals Revelation 6:1-8:1 - “the revelation of jesus christ, which god gave him to show his servants - things

Pre-Christian Revelation T he first phase of revelation found in the Old Testament - . salvation history. the history of

Revelation 1:1-2 The revelation of Jesus Christ, - Which god gave him to show his servants what must soon take place. he

The Seven Churches of Revelation - . a journey discovery &amp; exploration what it meant then and now context how to

Preparing for the Last Days Revelation 14 - . “john the revelator, saw another angel fly in the midst of heaven, having