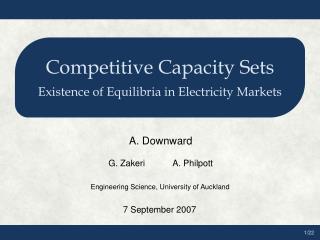 Competitive Capacity Sets Existence of Equilibria in Electricity Markets. A. Downward G. Zakeri A. Philpott. Engineering Science, University of Auckland. 7 September 2007. Motivation. It has been shown that transmission grids can affect the competitiveness of electricity markets.

The Cornerstones of Competitive Advantage: a RBV - Margaret peteraf kellogg – tuck at dartmouth. the cornerstones of