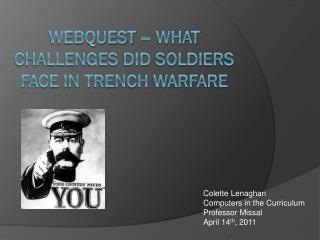 Webquest – What challenges did soldiers face in trench warfare Webquest – What challenges did soldiers face in trench warfare

Trench Warfare and WWI - . location of the

WWI Notes 2: The August Madness and the Beginning of WWI - . world wars ms. hamer february 4, 2011. myth of the august

MA-20 Evolution of Warfare The Nature of War - . man and war ltcol mitchell. how we’re going to examine the

Program Evaluator (PEV) Face-to-Face Training - . welcome!. “our duty is to believe that for which we have sufficient

Medical Aspects of Chemical, Biological, And Radiological Warfare - . hm2 ibanez. “ gas warfare ”. the use of