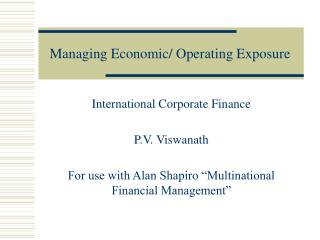 Measuring and Managing Economic Exposure - . chapter 10. steps to the creation of an economic exposure strategy. step 1.

DEPARTMENT OF ECONOMIC AND COMMUNITY DEVELOPMENT - . the economic and fiscal impacts of alternative buildouts associated

Managing through interesting times - . cpos the heroes of the economic downturn how procurement can save the day! chris