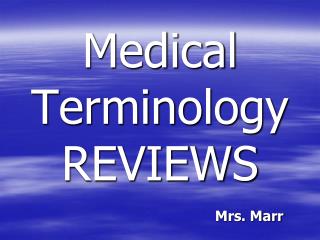 Medical Terminology REVIEWS. Mrs. Marr. Basic Structural Levels. Cells - simplest structural level cells have structural differences that are closely related to the physiology of each cell type. What is a groups of similar cells joined together to carry out specific functions?. Medical Terminology - . there are some rules though to using medical terminologyprefixes and roots are put together with

Medical Terminology - . and frequently used abbreviations. objectives. the student will be able to analyze medical

MEDICAL TERMINOLOGY - . the language of the health profession. origin of medical terms. hippocrates was a greek physician