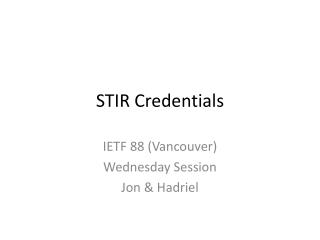 CREDENTIALS - . welcome to a complete marketing communications agency azure. we make brands!! the one-liner describes the

Project STIR - (steps toward independence and responsibility). clinical center for the study of development and

Teaching Credentials - . what is a teaching credential?. a credential is an authorization to teach a subject or subjects

The stir fry - . it was chinese new year at mouslecoomb school. it was the year of the goat. we decided to cook some food

Stir It Up - . by: ramin ganeshram published: 2011/ scholastic press genre: fiction created by: brianna b. setting. the