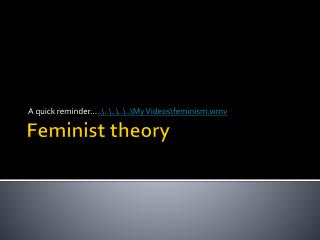 A quick reminder... ..........My Videosfeminism.wmv. Feminist theory. Feminist theory. Ali G interviews Sue Lees. Recap from last year. Do you consider yourself a feminist? How do you define the term ‘feminist’? Has feminism made life in the UK better?.

Literary Theory: An Introduction - Journeying through textual possibilities in eng 4u1. literary theory: an introduction.

Feminist Theory - . feminist theory. the basis of the feminist movements, both in literature and politics, is that

Reading Literature Through a Feminist Lens: Questions Which Feminist Critics Ask about Literary Texts - . in our