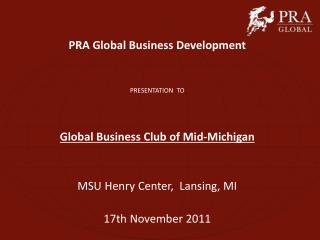 Global Business - Business is , after governments, the most important institutional agent involved in the process of

GLOBAL OPERATIONS an exploration of business strategy - . global operations. the strategic development of a high

Enterprise Development - . doing business with the world - the new role of corporate leadership in global development.

China Business Airplane Industry Growth, Forecast 2015-2020 - In 2014, the number of business airplane in global is