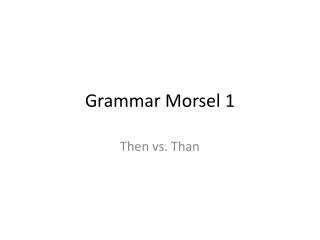 Chapter 3 Grammar 1 - . martinez spanish 1. gustar with infinitives. page 86 in textbook an infinitive is a verb without

Grammar Rule #1 - . a sentence must contain at least one subject and one verb, and it must form a complete thought. if it

Chapter 1- Grammar I - Spanish i- unit 1. chapter 1- grammar i. identifying parts of a sentence. subjects and verbs in

Spanish 1 Grammar Flipbook - . this will be a quiz grade. you will be expected to keep it for spanish 2 and have it with

Grammar Test 1 Review - . nouns, pronouns, verbs, and adjectives. identify the noun in the sentence below . i like

GRAMMAR #1 - . fragments and run-ons. fragments. a fragment is an incomplete thought; it may be missing a subject or a