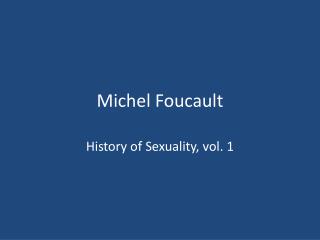 Michel Foucault. History of Sexuality, vol. 1. Michel Foucault, 1926-1984. We “other Victorians”. Relationship between sex and power as repression Speaking about it has the appearance of transgression, defying power, being subversive But why do we say we are repressed? Michel Foucault - . foucault vs. marx. like marx, foucault interested in inequality, in the exercise of power – but he