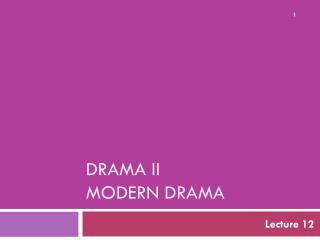 DRAMA II Modern Drama. Lecture 12. SYNOPSIS. O’Casey ‘s Works are a representation of contemporary influences: Nothingness , Hollowness and Purposelessness Irish Civil War: Jingoism How it effects the society and the individuals , How it crushes the economy and the system ,

Modern Drama - . a brief introduction to the genre of modern drama and its relevance to miller’s all my sons. what is

Drama - . a short history of theatre. greek theatre. greece. began as worship / festival for dionysus is the foundation

DRAMA - . the elements of drama. what is drama?. drama, or a play, is a form of literature in which the author tells the

DRAMA - . introduction to humanities. drama. drama is a species of literature whose basic medium is spoken language.

Drama - . elements of drama i. drama – major genre, or category, of literature; meant to be performed play – a story