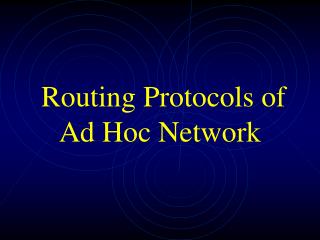 Routing Protocols of Ad Hoc Network. Introduction. What is Ad Hoc Network. All nodes are mobile and can be connected dynamically in an arbitrary manner. No default router available Potentially every node becomes a router: must be able to forward traffic on behalf of others.

Introduction to Dynamic Routing Protocol - Objectives. describe the role of dynamic routing protocols and place these

Sensor Networks Routing protocols - . goals of this chapter. in any network of diameter &gt; 1, the routing &amp;

Routing Protocols - . a router ‘knows’ only of networks attached to it directly – unless you configure a static

Routing protocols - . chapter 12 intro to routing &amp; switching. objectives. upon completion of this chapter, you

ROUTING PROTOCOLS - . by: er . amit mahajan. routing basics. the term routing is used for taking a packet from one device

A Review of Current Routing Protocols for Ad-Hoc Mobile Wireless Networks - . by lei chen. what is ad hoc wireless