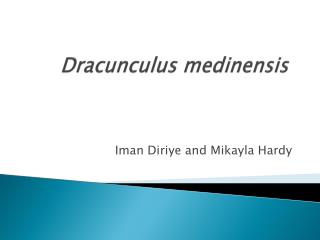 Dracunculus medinensis - . everything you wanted to know about “guinea worms” but, were afraid to ask. crisangel

Dracunculus Review - . in 5 sentences or less, give a summary of the disease, dracunculiasis . ascaris worms. causes

Dracunculiasis - . by: tini prajapati . outline. what is this disease? what causes it? how do people get it?

Dracunculiasis Guinea Worm Disease - . dracunculiasis. commonly as the guinea worm disease causes by the largest of

Dracunculus medinesis: The Most Cunning Parasite from an Immunological Perspective - . by: tiffany walsh november 10,

Guinea Worm Disease - . by: daniel coward. guinea worm disease. it is a preventable waterborne disease caused by a

Parasitology - . mallory smunk katie winkelman bridget weyer. what is a parasite?. a parasite is an organism that depends