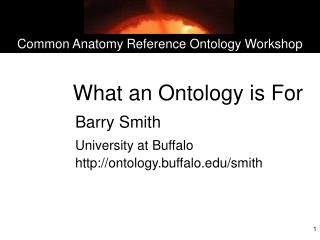 What an Ontology is For

What an Ontology is For - PowerPoint PPT Presentation Common Anatomy Reference Ontology Workshop. What an Ontology is For. Barry Smith University at Buffalo http://ontology.buffalo.edu/smith. we are accumulating huge amounts of data. how do we know what data we have ? how do I know what data you have ?

What an Ontology is For

Ontologies - . hasan tÜrksoy compiled, partly based on various online tutorials and presentations, with respect to their

Lecture 6 Ontology and the Semantic Web - . the problem of ontology. human beings can integrate highly heterogeneous

What is an Ontology? - . no exact definition a tool to help organize knowledge or a way to convey a theory on how to

The National Center for Biomedical Ontology - . one of three national centers for biomedical computing launched by nih in

Ontology Engineering for the Semantic Web and Beyond - . natalya f. noy stanford university noy@smi.stanford.edu. a large

Ontology Engineering - . nguyen trung lap. contents. what is an ontology? what is the usefulness of an ontology?

Integration of HL7 Security and Privacy Ontology with Other Ontologies - . tony weida. kinds of ontologies (guarino,

Ontologies - . what are ontologies?. originally, the filed dedicated to study the nature of everything sometimes referred