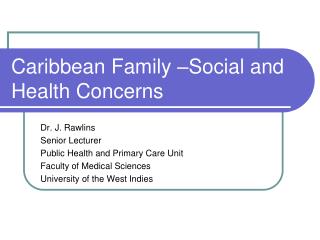 How Do I Get Through This ? - . the healing process for families. family outreach and response. individual support group

WELCOME! Please complete the “Reflection on Concerns and Vision” Questionnaire before the session begins. Thank

WELCOME! Please complete the “Reflection on Concerns and Vision” Questionnaire before the session begins. Thank

“WHY SOCIAL DETERMINANTS OF HEALTH? THE EVIDENCE” Commission on Social Determinants of Health - Michael marmot

The Family Unit - Is the focus of our attention work with the family as a collective unit. partner with families to

Impact of Social Institutions on Caribbean Culture and Society Cont’d - . the social institution of the justice system.