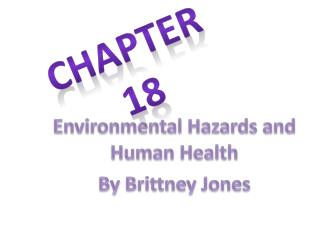 CHAPTER 18. Environmental Hazards and Human Health By Brittney Jones . What types of hazards do people face? . We can suffer from - biological hazards : from more than 1,400 pathogens than can infect people (bacteria, viruses, parasites, protozoa and fungi)

Viruses and Public Health - . viruses are responsible for &gt;50% of infectious diseases. what are they? are they

14-3 What Are Mineral Resources, and What Are their Environmental Effects?

Environmental Hazards and Human Health - . chapter 14. section 14-1. what major health hazards do we face?. we face many

Environmental Hazards and Human Health - . chapter 14. section 14-1. what major health hazards do we face? . risks are