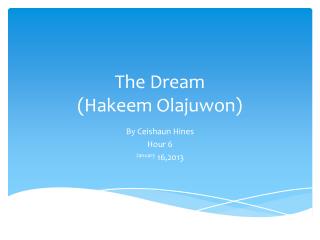 The Dream (Hakeem Olajuwon). By Ceishaun Hines Hour 6 January 16,2013. Background. Olajuwon was born to Salim and Abike Olajuwon, middle-class Yoruba owners of a cement business in Lagos, Nigeria . "Olajuwon" translates to "always being on top" in Yoruba .

Overview of the MN Dream Act - . jessica larson outreach coordinator april 11 th , 2014. is daca the same as the mn dream

The Role of ICT Deployment for National Security - . a presentation by: abdul-hakeem b. d. ajijola

The Dream Team - . outline. i – the origin ii – a crushing success iii – why this team was iconic ?. i- the origin

Hakeem ‘The Dream’ Olaujwon - . by: his prodigy… blaine moss. early life . hakeem was born in nigeria on january

A Midsummer Night’s Dream - . prezi. a midsummer night’s dream. symbolism/imagery and themes within the play.

Drafting your Dream-Team - . selecting the best people and managing people working as individuals and in groups. where we

My Dream House - . by: jackie vicksman. why i liked t his house. the elegant v ictorian style the bright green and color