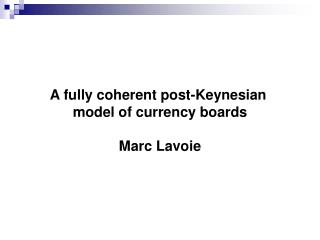 The Fixed-Price Keynesian Model : An Economy Below Full – Employment Focus on the Demand Side - . aggregate

The Keynesian Model - . the multiplier, the paradox of thrift, savings and investment, fiscal policy, and the tax

International Finance - Foreign exchange markets in the us, we use the us dollar as currency, and most countries have