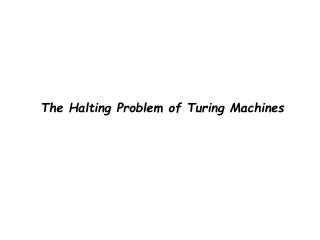 The Halting Problem of Turing Machines The Halting Problem of Turing Machines

4. Decidability - . the diagonalization method the halting problem is undecidable co-halt is unrecognizable.

Turing Machine Model - . are there computations that no “reasonable” computing machine can perform? the machine

D E C I D A B I L I T Y - . objectives. to investigate the power of algorithms to solve problems. to explore the limits

The Church-Turing Thesis - . chapter 18. are we done?. fsm  pda  turing machine is this the end of the line? there

Undecidable Problems (unsolvable problems) - . decidable languages. recall that: a language is decidable , if there is a

Undecidability - . everything is an integer countable and uncountable sets turing machines recursive and recursively