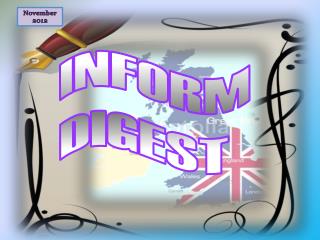 AfL and Target Setting - . jh – may 2009. why do we mark work?. to evaluate our students’ progress. to evaluate the

Speeches to Inform - . “ obviously, a man ’ s judgment cannot be better than the information on which he has based

Options for the HESDA Digest - . or … to blog or not to blog?. lesly huxley first presented at the hesda publications

Using the West’s ALA Digest of Decisions and Annotations - . the alr digest is just one way of getting into the multi