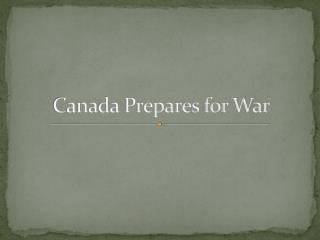 Canada Prepares for War. War is Declared. Canada was part of the British Commonwealth in 1914. This meant Canada could control its Domestic Policy (inside of Canada) but Britain controlled its Foreign Policy (relations with other countries)

Welcome - . to. jeopardy!. topic of the day. the constitution and american government. kee. directions : sit across from

Chp 18 Canada - . power review update feb 2008. which of the following is the cause that produced the effect described in

BELLWORK - . what was a primary difference in the ideologies/views of laurier and borden? who was sam hughes? what did he

Canada’s Contribution to D-Day - . the preparation. after making hitler fight on many fronts from russia, to north