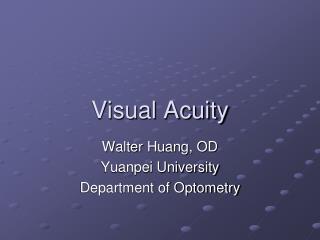 Visual Acuity. Walter Huang, OD Yuanpei University Department of Optometry. Definition. The resolving power of the eye used to assess and quantify the eye’s ability to resolve varying letter sizes Visual acuity is dependent on: The refractive error of the eye

Visual Acuity - Refraction: the deviation of a ray of light passing from one medium into another is called

VISUAL ACUITY - . presented by t.muthuramalingam. definition. is an ability of eye to discriminate two stimuli separated

Visual Acuity Testing - . lynn lawrence, cpot, aboc. define visual acuity. the measurement of the ability of the eye to

Acuity - Noun sharpness, keenness. like an “acute” angle. acuity. verb to portray, sketch, or describe in detail. a

The Measurement of Vision and Visual Acuity - . the traditional way to measure vision and visual acuity is to use an