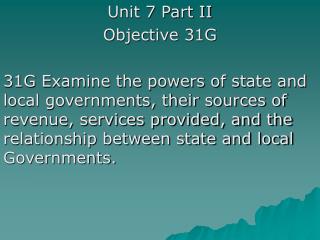 Cell Unit Part II - . this area focuses on terms and processes that occur within the cell. physiology: cell anatomy and

Unit 7: Part 1 - . remembering the wars. catastrophe of epic dimensions: wwii. never before had so many fought never

Unit 7 part B - . staffing. employee indoctrination:. begins as soon as a person has been selected for a position , and

AG II Unit 7 - Entomology. what is entomology?it is the study of insects. insects are always around us. scientists called

Real World Unit: Part II - . the interview. in this unit we will:. update our resumes create a cover letter learn the