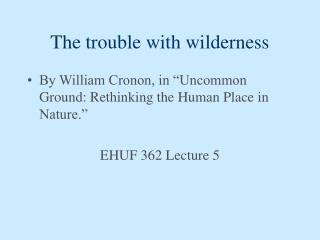 The trouble with wilderness

The trouble with wilderness. By William Cronon, in “Uncommon Ground: Rethinking the Human Place in Nature.” EHUF 362 Lecture 5. The idea of wilderness has been a fundamental tenet of the environmental movement for decades.

The trouble with wilderness

Bedouin wilds of Sinai - Bedouin tribes guide hikers through the untamed wilderness of the nile valley in sinai, egypt,

Frankenstein A Modern Prometheus - . giachetti english 12. november 19, 2012. periods 5 and 6 learning targets i can

Reader Response 8… - Peer planner study for quiz on chpts 7-8 . reader response 8…. write down on a piece of paper