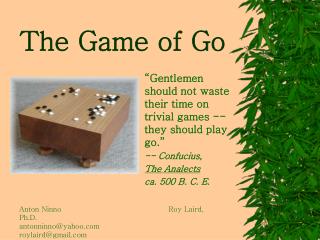 The Game of Go

The Game of Go “Gentlemen should not waste their time on trivial games -- they should play go.” -- Confucius, The Analects ca. 500 B. C. E. Anton Ninno Roy Laird, Ph.D. antonninno@yahoo.com roylaird@gmail.com special thanks to Kiseido Publications

The Game of Go

Pronunciation Board game - Additional activity. pronunciation board game. how to play. roll the dice and advance

The Dating Game - . with our host,. welcome to the dating game, the game where we find the greatest common factors

Game Art &amp; Design - . ancient games what did we play a long time ago?. royal game of ur. one of the earliest

The Game Boy - . by: william boddington date: october hour: 1st. about the game

The slap game: - . directions: place cards between you and your face partner hands on shoulders you will see an example

Create a Board Game - . about the renaissance. game choices . memory match guess who? apples to apples candy land risk

Trivial Pursuit - . by: felix bystedt. what is it?. trivial pursuit is a board game where you go around a board with a