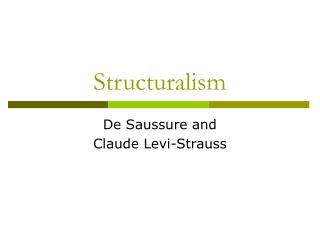 STRUCTURALISM IN SOCIOLOGY - . “the belief that phenomena of human life are not intelligible except through their

Structuralism in Psychology - . founders of structuralism. wilhelm wundt considered the “father of psychology”

Structuralism and semiotics - . advanced english 9. compulsory intro slide. “the test of a first-rate intelligence is

*Adapted and derived from Peter Barry’s Beginning Theory - * informed by the work of lee gutkind , “godfather of

Structuralism in Linguistics An intellectual adventure - . with skylar. m., gavin. r. and zane. m. what is

Structuralism - . by john lye 1996. general principles. meaning occurs through difference relations among signs are of

Precursors of Structuralism - . language durkheim and idea of sacred/profane linguistics melds sociology, the study of

Reflexive Documentary - . by sam, misha , daniel and charlotte. what is reflexive documentary?. “ instead of seeing

Lecture 9: Volunteerism, Structuralism and other Early Approaches to Psychology - . i. introduction a. introduction. we