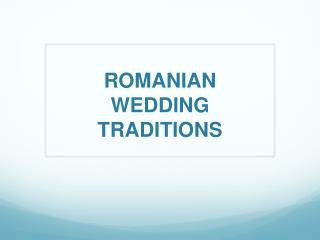 ROMANIAN WEDDING TRADITIONS The wedding is the most interesting family custom of all. It is also a complex custom which has various traditional forms all over the country and combines economic, law, ritual and folkloric elements.

Romanian games - . black monster. this is a game suitable to approaching

ROMANIA - . the capital of romania is … bucharest. languages: romanian is the official language, hungarian and german

ROMA NIA THE MINISTR Y OF EDUCATION, RESEARCH, YOUTH AND SPORT THE NATIONAL CENTRE FOR TECHNICAL AND VOCATIONAL EDUCAT

Contact Center within your reach: Improving your communication with Voxtrons software suite - Commercial bank of romania,