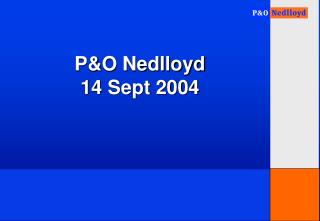 P&O Nedlloyd 14 Sept 2004 Who are we? P&O Nedlloyd is one of the world’s leading providers of point-to-point container shipping services. The company was formed in December 1996. P&O Nedlloyd is listed on the Amsterdam Stock Exchange (Euronext) under the name of Royal P&O Nedlloyd NV.