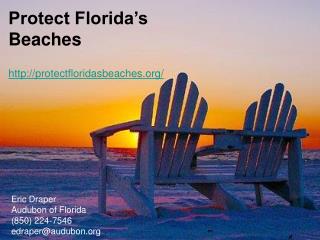 Protect Florida’s Beaches http://protectfloridasbeaches.org/. Eric Draper Audubon of Florida (850) 224-7546 edraper@audubon.org. Two Ways to Approach Drilling Debate. The risk to Florida’s environment and coastal economy are not worth the questionable benefits, OR Weathering and Erosion - . created by: madelyn dzierzynski and taryn grasser. weathering is the breaking down of rocks,

Barrier Islands - . long, narrow deposits of sand that form parallel to the shore and away from surf action found all

SEA TURTLES - . the oldest creature on earth by: cd by: cd. introduction. the scientific name of a sea turtle is ceratta