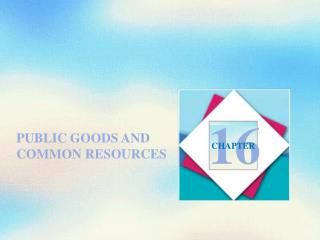 16 PUBLIC GOODS AND COMMON RESOURCES CHAPTER Objectives After studying this chapter, you will able to Distinguish among private goods, public goods, and common resources. Explain how the free-rider problem arises and how the quantity of public goods is determined

PUBLIC GOODS AND COMMON RESOURCES - . chapter 11. “the best things in life are free. . .”. most goods in our economy

Private vs Public Goods - . what difference does it make? would you like government to provide you free college? what

PRIVATE GOODS AND PUBLIC GOODS - . what’s the difference between installing a new bathroom in a house and building a