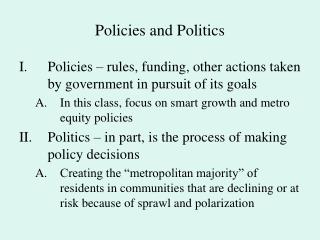 Policies and Politics Policies – rules, funding, other actions taken by government in pursuit of its goals In this class, focus on smart growth and metro equity policies Politics – in part, is the process of making policy decisions

Political Parties - . the house of commons. the green party. elizabeth may. key terms to know. policy: a plan of action

A Casualty of Political Transformation?: The Politics of Japanese Energy Efficiency - . phillip y. lipscy department of

Intro to Comparative Politics - . what is political science?. the study of governments, public policies, political

Politics of Food: Food Policy - . hfa 4u/c. learning goals:. distinction between food as a right and food as a commodity