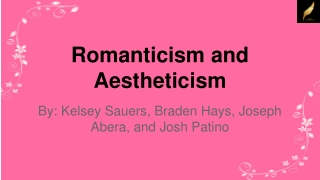 Romanticism and Aestheticism. By: Kelsey Sauers, Braden Hays, Joseph Abera, and Josh Patino. What is Romanticism?. Romanticism: a movement in the arts and literature that emphasizes inspiration and primacy of the individual

American Romanticism - . a literary movement 1830-1865. take notes when you see the pencil. american romanticism. the