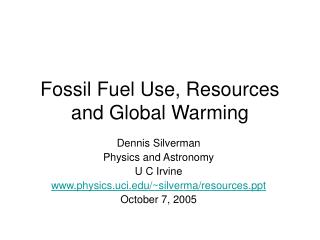 Fossil Fuel - . what are fossil

Fossil Fuel - . there are 3 major forms of fossil fuel. coal which is a sedimentary rock that is used as a human resource

Fossil Fuel Energy - . by luke vitagliano. what fossil fuel is. coal, oil and gas are all fossil fuels because they have

An Overview of Energy Use and Fossil Fuel Re - Sources. pradip majumdar professor department of mechanical engineering