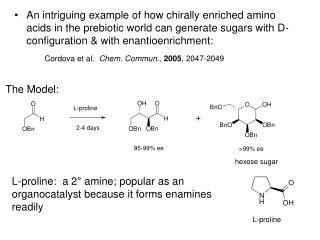 Cordova et al. Chem. Commun ., 2005 , 2047-2049 An intriguing example of how chirally enriched amino acids in the prebiotic world can generate sugars with D-configuration & with enantioenrichment: The Model:

Origins of Sugars in the Prebiotic World - . one theory: the formose reaction (discovered by butterow in 1861)

Amino Sugars - Amino sugars are chemical compounds that have a sugar backbone, in which one of the hydroxyl groups is

AMINO ACIDS - . ikeda in 1908, working on the flavouring component in kelps discovered glutamic acid (l-glutamate) after

Amino Acids - . aims of the lecture. the students should be learning about amino acids: the structures and types. the

L and D isomers of amino acids - . ionization state as a function of ph. trans and cis peptide bonds trans and cis

Amino Acids - . characteristics and structures. amino acids. there are 20 amino acids derived from proteins. while there

Amino Acids - . structural feature of proteins. proteins functionally diverse molecules in living systems such as: in

Amino Acids - . c483 spring 2013. questions. 1. amino acids with non- ionizable side chains are zwitterions when they are