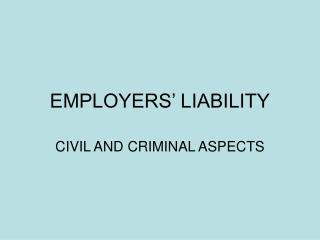 EMPLOYERS’ LIABILITY. CIVIL AND CRIMINAL ASPECTS. FACTS. In the UK there are on average more than 300 workplace deaths annually Work related illness is costing more every year – now up to £18bn – around 2.1% -2.6% GDP. COST OF WORK RELATED ILLNESS AND INJURY.

Liability - . liable or not?. stella liebeck is burned from a hot cup of coffee from mcdonalds and sues for $2.86 million

Contacting employers - . how to successfully access the ‘hidden’ job market. improve your changes of getting a job.

Phoning employers - . opening lines. rehearse your opening lines before you call. here’s what to do: introduce yourself

Corporate Employers - . how to get a great uta intern. why should i care. by participating in this program, you benefit