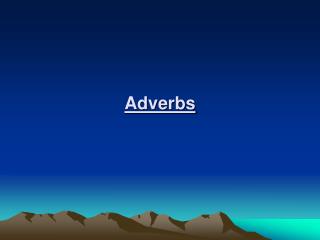 Adverbs. Adverbs modify verbs adjectives other adverbs quantifiers and whole sentences. They answer the questions How? When? Where? How often? How sure?. Adverbs that modify verbs can go in several different places in a sentence. At the beginning At the end After the helping verb.

Notes to the text - . word learning booster. talk about friendship among schoolmates. learn to use indirect speech to

Recognizing Relationships - . between sentences and within sentences. what do readers mean by “relationships”?.

Always Never Usually Adverbs of Frequency Sometimes Occasionally Rarely - . how often do you go to school?. how often do

Using Semicolons - . we will proofread sentences for the correct use of semicolons. proofread= look over, edit.