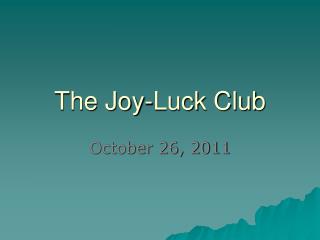 The Joy-Luck Club. October 26, 2011. Interesting Facts About China. The Great Wall of China is NOT visible from outer space. Its too thin. Its just a myth that it can be seen. The only man-made structures visible from space are: The Pyramids of Giza and the Hoover Dam.

LUCK? - . providence. god is providing for us and controlling what happens in our lives. old testament. esther.

Join the Club! - . tips and tricks for running a successful book club. presented at nla 2012 by rebecca colbert and

Aerospace Club Purpose of club: To teach students about aerospace, piloting and other fundamentals of aviation Sponsor(

CLUB/PARTY DRUGS - . overview of popular club/party drugs, their side effects and what to look for:. presentation

Journal Club - How to use and article about a diagnostic test satyen gada, md lt mc (fs) usn ncc pediatric

The Joy Luck Club - . author: amy tan. born in oakland california grew up in san francisco other works include: the