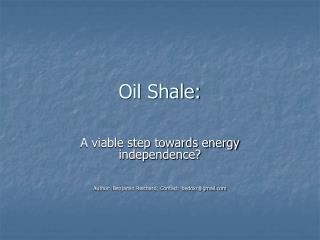 O il shale – viewed in the light of the Estonian experience - . what is oil shale ?. oil s hale is a sedimentary rock

Utah Oil Shale – what and where is it, how much is there, and why is it important? - . spe-uga oil shale conference may

An INTRODUCTION TO ISSUES IN ENVIRONMENTAL GEOLOGY OF OIL SHALE AND TAR Sands - . jeremy boak, colorado school of mines

Kerogen Oil Production Group, LLC - . kopg is an early stage start up company engaged in the design and licensing of

Hydrofracking for shale gas, oil shale, and geothermal energy - . mine 292 – lecture 23 john a. meech. what is

The Eagle Ford Shale Outcrop Studies Related to the Oil and Gas Potential of a Major Unconventional Reservoir. - The