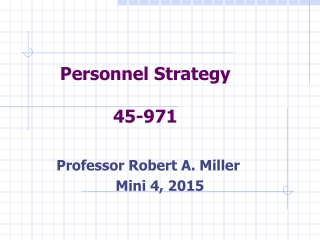 Personnel Strategy 45-971. Professor Robert A. Miller Mini 4, 2015. Course objectives. This course will help you to better understand: How workers respond to opportunities for advancement and incentives that affect their working conditions and financial compensation.

Trade and Investment Strategy 45-871 - . professor robert a. miller. preliminaries. before the lecture starts, if you

Develop an Effective Communications Strategy for Your Project: 45 Tips in 45 Minutes - . patricia b. wood director of