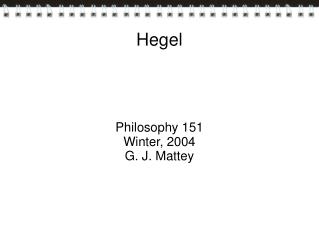 Philosophy 151 Winter, 2004 G. J. Mattey. Hegel. Philosophy. Philosophy is ultimately concerned with God, conceived as infinite and absolute Its secondary concern is with nature and the human mind, both of which are finite and relative

Hegel: the first cultural-historical Psychologist - . a 30 minute talk by andy blunden for the laboratory for comparative

Georg W ilhelm Friedrich Hegel and the Modern A ge - . biography. hegel was born august 27, 1770 in stuggart . he studied

phenomenology of Spirit - hegel - . independence and dependence: the dialectic between master and slave. hegel describes

The analysis of the Sublime - . seminar “kant: critique of the power of judgment” university of iceland session 8

Hegel s Philosophy of Nature as the Avatar of Spirit - Main idea. against separation of nature and spiritconventional

The Missing Mediation in Pragmatic Interpretations of Hegel - . by andy blunden. ‘spirit’ is the ‘nature of human

Winter blues - Scenes of winter weather around the

WINTER 2014-15 FORECAST REVIEW - . dogs and cats sleeping together …mass hysteria. hype… is going to be a big issue