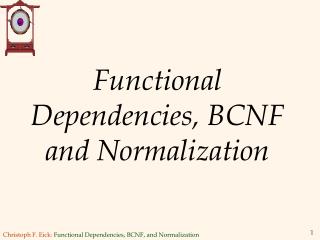 Lecture 6 - . normalization: advanced forms. objectives. how inference rules can identify a set of all functional

Normalization - . learning objectives. definition of normalization and its purpose in database design types of normal

Strategies for Information Extraction and Artifact Reduction in Functional MRI - . peter a. bandettini, ph.d unit on