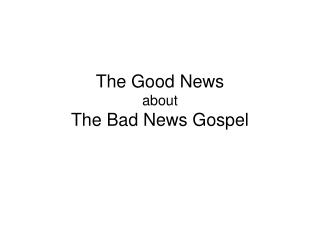 The Good News about The Bad News Gospel

The Good News about The Bad News Gospel The BAD News Gospel: Humans are “fallen”, “depraved” and incapable of doing the right thing “Human Nature” is intrinsically evil. I am not responsible God is to blame, not I The Good News: It’s more complicated than that:

The Good News about The Bad News Gospel

31 Day Adventure - . the gospel from 10,000 feet. plan b control is an illusion how i respond determines the quality of

WZMS NEWS - . today is: november 16, 2012. administrator news. students remember that your school uniform must be…. a

The Four Gospels - Life of christ. the four gospels. © john stevenson, 2011. matthew. the gospel of the king. the gospel

First Principles and Ordinances of the Gospel - . 4 th article of faith, d&amp;c