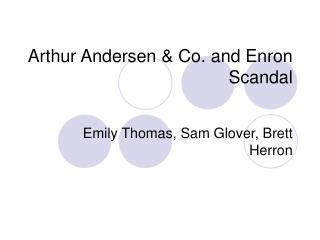 Enron Europe - . e-mail your questions to enron europe office of the chairman prior to and during the presentation or

Preserving a Culture of Trust - . paul tanaka office of university counsel. why did events in state college become the

And Then There Were None – Looking Inside the Andersen Collapse - . september 2007 nick abrahams partner and sydney